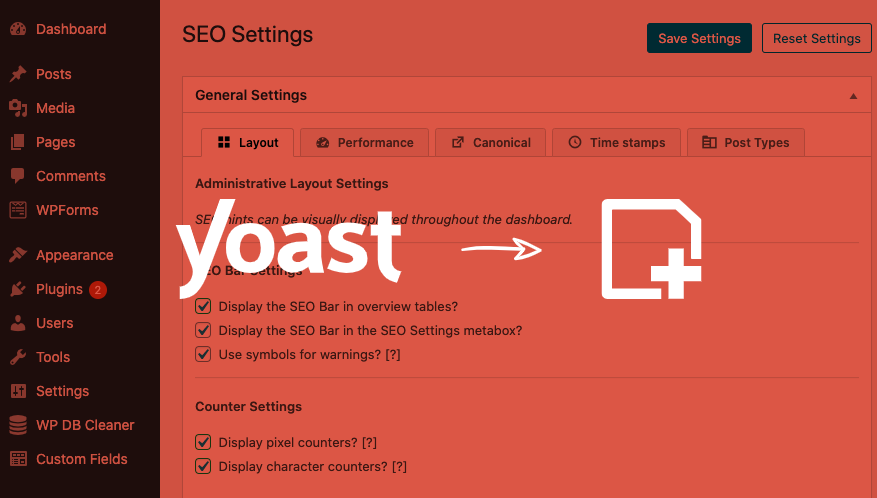 The SEO framework is a plugin that will help on the backend of your website. It’s more than just a plugin, it’s an entire system to help you rank in Google.

Yoast SEO is another popular choice for WordPress users who want to optimize their site and content for better rankings.

They both have pros and cons but choosing one over the other can be tricky because they do have some overlapping features.

In this post, we’ll go through what makes each different from each other as well as highlight some key differences between them so, you can make the perfect decision when picking out the best SEO plugin.

Yoast SEO is a plugin that has been dominating the SEO space for quite some time now. However, there are many people who believe that it is not the best SEO plugin on the market and should be replaced with something else – such as The SEO Framework. In this article, we will explore what SEO framework does better than Yoast SEO to see if it really is an alternative worth considering.

The seo framework is cleaner and faster. It also has better support than Yoast SEO, as well as incredible responsive customer service that never leaves you waiting with your problem for days without responding to it.

Another thing many people love about the SEO framework is how easy it is to customize by adding optional extensions – something which Yoast SEO does not allow.

Another great reason why so many users prefer SEO over Yoast SEO is its price tag: The premium version of the SEO framework costs much less than 15 euros whereas Yoast SEO’s can cost up to $99 at times (whenever they are on sale).

How yoast is slow and bloated

Another thing you may have noticed is how bloated Yoast SEO can feel, especially if Yoast SEO and other plugins are installed together in your dashboard – the plugin will slow down even more as it loads up an ad for their premium version which you don’t want or need on your website and tons of other annoying ads that distract from what’s important to the visitor: reading good content about whatever niche they’re interested in.

This is why many people believe The SEO Framework should take over as the SEO plugin standard because its lightweight design means that pages load faster without slowing everything else down at all – not just wordpress but any page too! It provides better SEO functionality than Yoast SEO.

Schema is optional, customizable, and much cleaner. Yoast SEO forces schema on all pages of your site which can make for a messy implementation if you’re not an expert at SEO or don’t have time to work with schema markup.

The SEO Framework lets you choose what type of content should be supported by schema – such as blog posts, products or locations, etc… so that you get only the SEO features that are relevant to your website.

No Poor advertisements in The SEO Framework

Unlike Yoast, the paid version of SEO Framework does not have any ads. In the free version of Yoast, you get tons of adverts for the premium version.

No annoying notifications and prompts

Yoast comes with notifications and prompts, which are often completely unnecessary. Unwanted ads or prompts – just an option to buy the pro plan.

The SEO Framework is an SEO plugin that means you get SEO without ads. Unlike Yoast, it doesn’t have any annoying ads for its overpriced extensions and courses.

You don’t need Yoast SEO when you’ve got an SEO framework!

The SEO Framework Sitemap is better than yoast

I used to use Yoast SEO for all my SEO needs until I realized that a lot of the time Google would not recognize my site’s new posts. It was as if Google Search Console couldn’t find them in its database after weeks or days of deployment.

This is unacceptable because one thing we know about SEO and google nowadays is that they are always changing their algorithms with every update which means you need to be constantly adapting your methods to keep up.

Eventually, the error would go away after a while, as if Google was able to read the sitemap after a few days to a few weeks but this happened more often than it should have and when I switched over to SEO Framework everything started working again instantly without any problem.

How to migrate from yoast to TSF?

If you are using Yoast SEO and are very happy then no need to migrate. If you still want to improve your rankings and website speed then I prefer migrating from Yoast to TSF.

You can follow these steps to move further from Yoast to The SEO framework.

All of your most important settings should transfer over with the SEO Data Transporter plugin. However, you can’t afford to miss anything on this list that matters:

You might find that your site runs more smoothly if you use a staging copy of it before switching SEO plugins. You can also better cross-check how the change goes by catching any potential issues on this version first.

The SEO Framework has all the same important features as Yoast, with none of the drawbacks. It also has a much better customer support and is cheaper than its competition. For these reasons, I am changing my default recommendation to The SEO Framework from Yoast without a second thought!

→ Get Kinsta Hosting
→ Cloudways 25% Discount
→ Get Perfmatters
→ Get GenerateBlocks